Like the Naked Cowboy with a lasso (does he even lasso, bro?) I’m going to try to pull together a list of some of the Broadway nods and Easter eggs that make [title of show] the musical mayhem it is. Thankfully, “The Gray Lady” already compiled quite the compendium (including a gem of an original from co-creator Hunter Bell–check out the video in the sidebar):

As for some of those not mentioned in the article above, here’s what I found out from diving down the [title of show] rabbit hole: 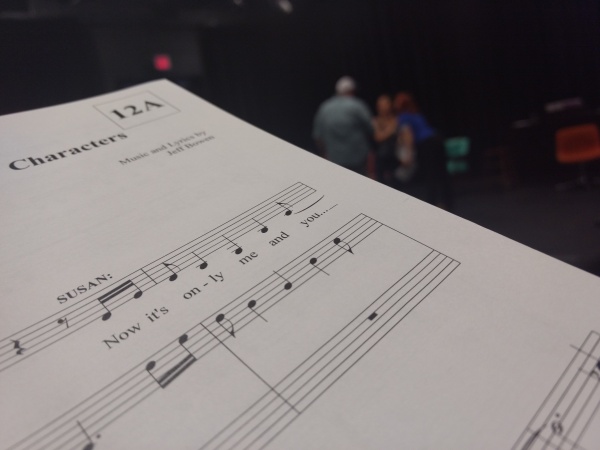 So, about that keeping updated thing… yeah. It’s been a (little more than) a week, and plenty has happened, so let’s go all montage to catch you up.

First, a little taste to whet your [title of show] appetite:

As you can see from this brief moment I get to enjoy the talents of my castmates, the first (little more than) half of this 90 minute, one-act beast is on its feet and sounds & looks pretty good! But, the reality is that we do have fewer than two weeks and the last couple of songs/scenes hit you (and us) fast and hard. As the plot picks up, so too does the variety of song styles and witty dialogue building to a [title of show]-splosion that feels a lot like art imitating life for many of us. You know when you starts something exciting and it snowballs to a level of stress that just becomes overwhelming? Yeah, something like that. But you’ll have to find out how it all plays out when you come see it.

It’s probably a good thing I’m still super excited to come to rehearsal each day (even today when we slogged through the beast that is “Montage Part 3: Development Medley”). This group plays so well off each other and makes wonderful discoveries each time we run through a scene. It truly continues to be a joyWhen it comes to the music, I’ve learned that while I have a tendency to lose my part once we add the choreography, I’m still jazzed enough to put in the work plunking out notes until I’ve got it (mostly) in my head–at least enough to where it locks in when we get back to it at rehearsal.

So that’s where we’re at. Blocking wraps up tomorrow and then we have about two weeks to clean, polish and spit-shine all the sparkly [title of show] goodness.

As promised on Instagram, I’m going to try to post updates on this latest theatrical venture as Jeff in [title of show] at the Weber Center. So, let’s do it.

For those who aren’t familiar with the production, [title of show] is a Tony-nominated musical about a group of friends trying to come up with an original musical to enter into a New York theatre festival. Their way to avoid copying what they’ve seen before is to literally set the process of creating the show to music. Full of humor (mostly R-rated), self-awareness, obscure references and some catchy, catchy tunes, [title of show] also hits home with questions many of us face, namely: does what I’m doing actually matter? It’s a one-act, 90-minute ride that makes you feel like you’re on the inside of this group’s inside joke. Why’s it called [title of show] you may ask? Well, you’ll have to see it to find out!

I am truly humbled to be on the inside, so to speak, with this talented group. The level I’m stepping up to with Matt (Hunter/director), Stephanie (Heidi), Liz (Susan) and our accompanist Shealan (Mary) is an ensemble unlike any I’ve ever worked with before. I’m coming at this as an amateur in theatre–I do what I do for the love of it, and now I get a chance to work with people who have all worked professionally as actors and musicians.

For that same reason, I was incredibly nervous–right up until the first rehearsal. I had worked on a few songs ahead of time with Shealan and listened extensively to the Broadway cast album (for real–[title of show] songs have been exclusively running through my head for the better part of a month), but I didn’t want it to look too obvious I hadn’t really done this too much before. Thankfully, Matt put me at ease right away by keeping the expectations pretty easy. Add in the support, energy and enthusiasm everyone brought, and three days in I can safely say I think we’ve already clicked.

Now my nerves turn to the task of getting all of this down in three weeks. Yeah. The show goes up July 20 for six Friday & Saturday evening performances at the Weber Center, and while we sound pretty good on a few songs so far, there’s still “The September Song” and “Development Medley” ahead. Ugh. But hey, we’ve got three weeks, right?

Buckle up. It’s going to be a great ride!